This is how I have sorted my developing of B&W film namely Ilford FP4 plus although other films are dealt with in a similar way.

Thanks to Nomad on photography-forum.org for his help.

My first film wasn’t a great success pretty flat so I shot another roll and processed it slightly different mainly increased the agitation of the developer and the negatives look much better.

I used Ilford FP4 Plus film and loaded it into a Paterson system4 developing drum using a film changing bag to load the spiral and get the film into the drum for processing.

Option B  if you don’t have a film changing bag is to load the film under the bedsheets.

The process is pretty straight forward and as long as you take reasonable care and work to a set routine the results should be consistent.

First thing I do is get a plastic bucket of water at 20degrees C and lay a plastic binbag on the kitchen worktop.

I keep the containers of chemicals in a plastic bin and use one shot developer and fixer which makes life easier.

The basic process is firstly to load the film into the process drum, develop, fix and final wash and dry, then scan images to PC.

The whole thing took about 1/2 an hour to process the film plus the scanning time on top of that.

Here is my “kit” for developing film (B&W) everything I need except the bucket of water at 20degrees centigrade.
I got a shallow box from Ikea to fit it all in and it slides in to the shelf in my small cupboard the bottles of chemicals are in a small plastic bin just in case there is a leak…always better to be prepared 🙂 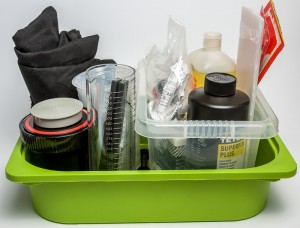 And had a play in Photoshop to make one of those textbook key map illustrations. 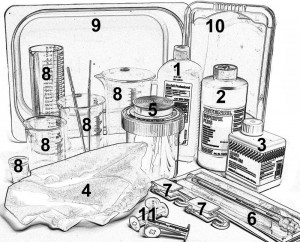 Here are a few of the results from film number 2 🙂

Note :amended step 3 from washing under the tap to using water from the bucket kinder than massive temperature change.